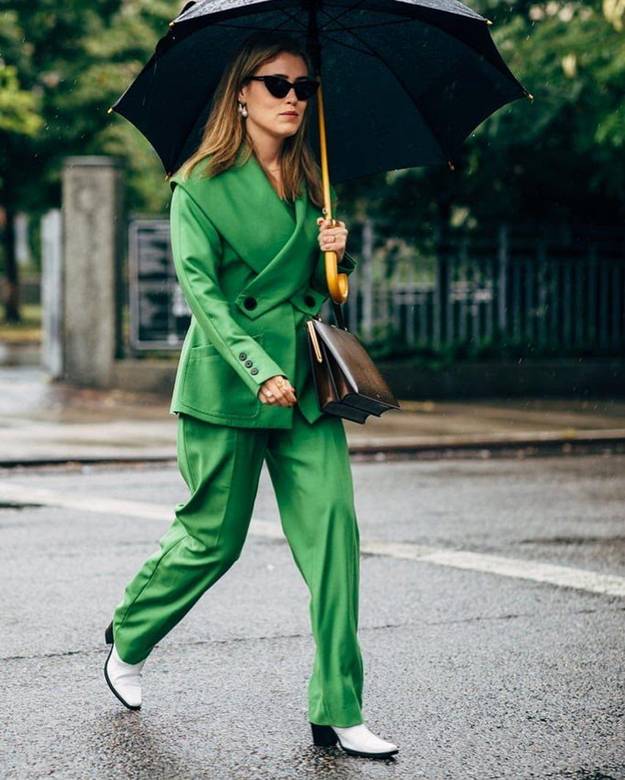 We’ve kept close watch of the runways from New York to Paris, but as we all know, the real action happens on the streets outside the FW venues as influencers, fashionistas and general glitterati flock at the scene to show off their finest vintage fashion concoctions, land on the photos of the street style section, and of course, give us a little envy and a great deal of inspiration for our own upcoming fall outfits. As usual we have done our due diligence to cover the highlights from all the major fashion capitals, so embark on this trendy adventure with us and perhaps you’ll come out the other side with a whole list of ‘to buy’ items. 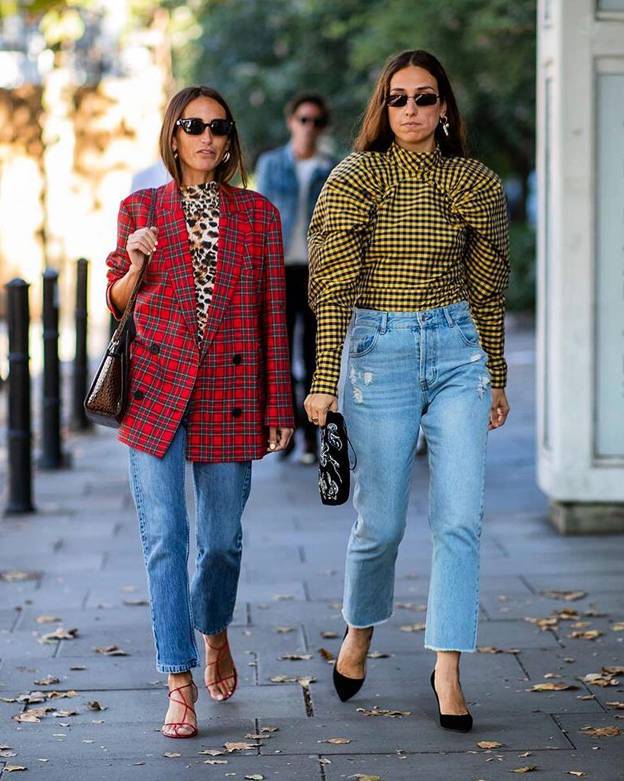 If there was a smidge of doubt that the plaid pattern truly is the pattern of the fall season, the street style has certainly removed it. Plaid was seen essentially everywhere. It was walking in the form of a blazer as well as a puff-sleeve blouse in London, full plaid skirts paired with simple tees in Milan, chic coats and entire cute oversized ensembles in Paris. Skirts, sweaters, scarves, every single garment in one form of the plaid pattern or other made a presence, so yes, it’s official, the plaid pattern wins the fall season by a landslide. 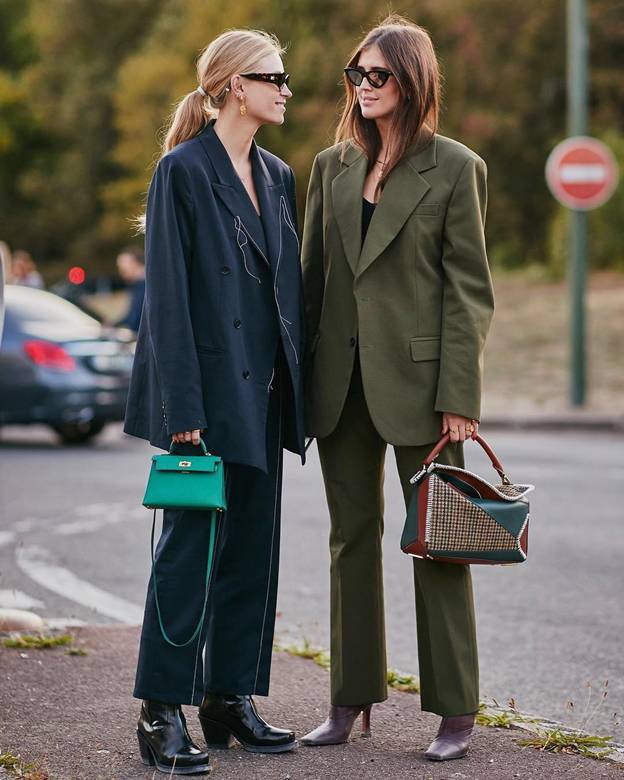 Whether we looked at Paris, NYC or London, one thing doesn’t seem to change and that is the global love that monochormance in the form of the oversized pantsuit is getting. It has been spotted on the chic ladies of Paris who decided to pair theirs with sleek heels and designer handbags, New Yorkers who opted for saturated colors and classic leather handbags as well as some very chic London women who exuded not only their love for the monochromatic power suit but also the color pink. It’s safe to say that the power of the power suit still rules all so get it while it’s still hot, but there’s no rush as we suspect that we’ll be vibing on the suit for a very long time. 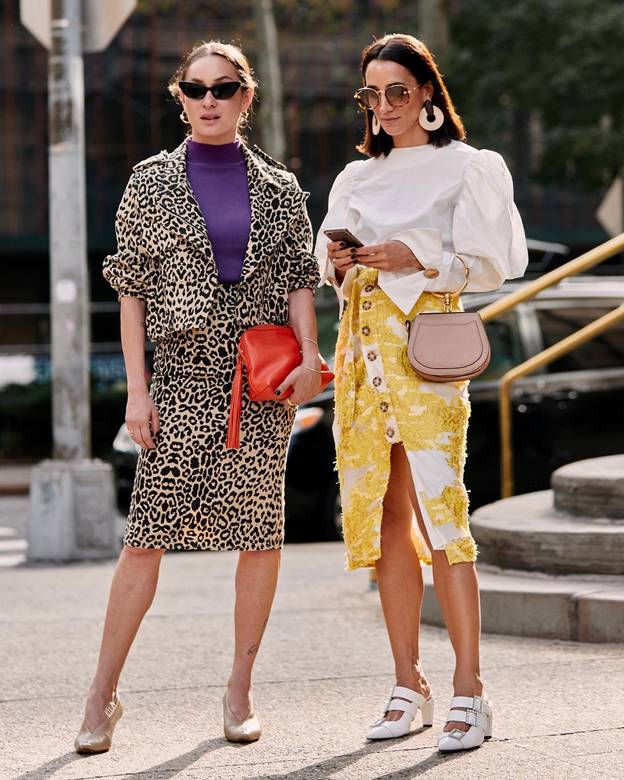 One of the fall and winter inevitabilities is definitely the animal print. If the streets of fashion capitals are any indicator, the snake and leopard print are definitely in the lead, and worry not, they come in all shapes and forms. The print is certainly a tough competitor to the plaid print, but we still believe that timelessness will trump trendiness, although time will tell. Nonetheless, let’s check out some of the best-rocked animal print outfits. First up is New York, who is not afraid of rocking a whole lot of the leopard print – case in point this fashionista who opted for not only a pencil skirt in the pattern but a vintage jacket to match. Other New Yorkers showed their love for the snake print in a more subtle way – through their choice of bag, while London decided to take the casual and somewhat rebellious route (no surprise there), by completing and all-denim look with a poignant leopard print coat, which we must admit, looks pretty darn well when paired with something as casual as denim.The women of Milan said it with a chic midi pencil skirt, which again, paired with a luxurious orange top looks surprisingly classy, and Paris wasn’t far behind, although a sporty top and a frilly leopard skirt make for an unlikely yet strangely alluring friendship. 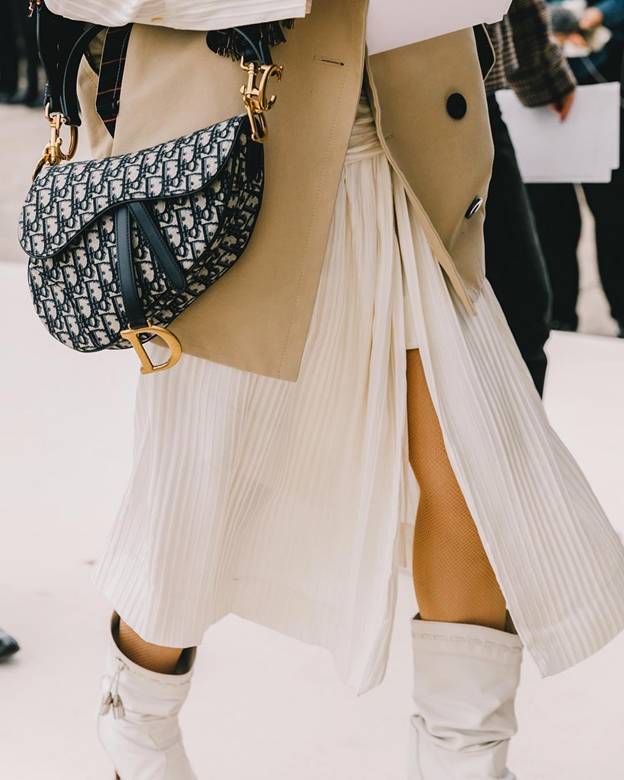 The bags seen in all the cities ranged from midi to micro, but the one thing they have in common is that each and every one of them is a designer bag. For some, you have to be a connoisseur to know they’re Meghan Markle bag for instance, but others give it away with either the brand’s logo pattern splashed across the bag, a simple letter or a full-blown brand name. 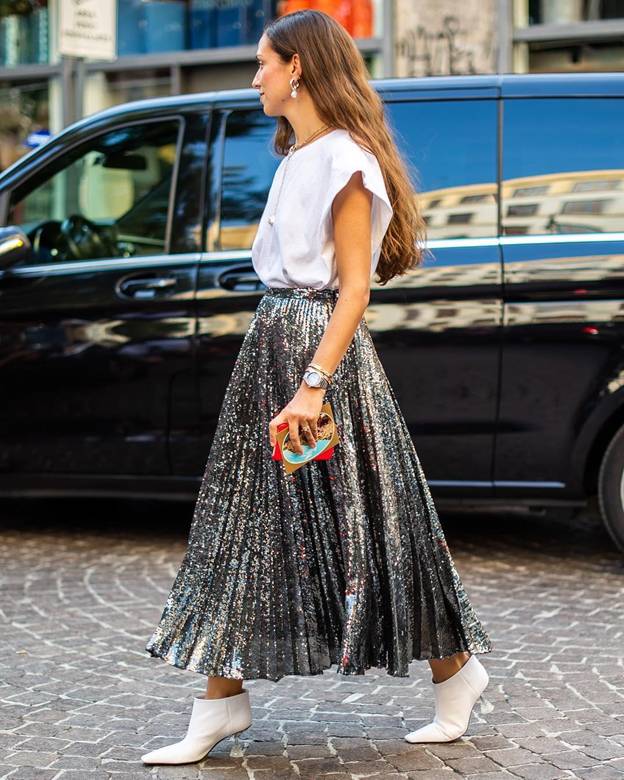 The one thing that could not escape the eye, as it’s as shiny as it gets is metallic skirts, whether sequin or of a different fabric, that were present across two continents and one city that’s separated from the rest of Europe by a ‘small’ body of water. The interesting thing, the bling was spotted on amazingly frilly and super-chic skirts only in all of the cities, and while this wouldn’t be our first choice for daytime wear, it sure does bring a little pizzazz to a gloomy fall day so perhaps we need to reconsider what constitutes appropriate day wear and how far we can push this limit as this looks pretty darn good. 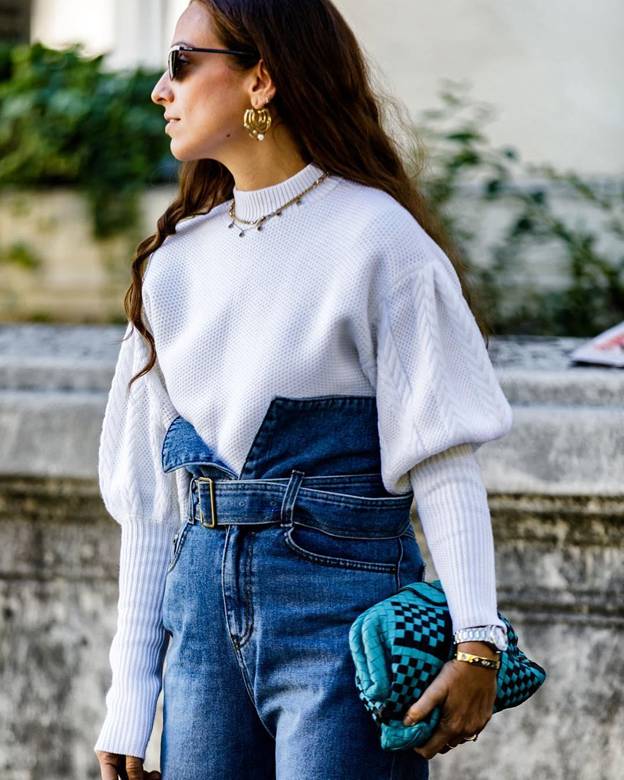 Denim will never go out of style, we all know that, but what we didn’t know is that it has the ability to transcend mom jeans and regular or oversized jean jackets and turn into something completely different. We have completely fallen in love with these high-rise jeans with a denim belt and a piece of fabric that just goes over the waist. It must elongate the legs and make them look super fine, not to mention that it’s a great alternative to regular jeans. Another pair we loved was seen in Paris as well, and we are totally and completely crazy about the asymmetrical buttons – these jeans can elevate any look, which jeans regularly don’t have the ability to do and we love it! Finally, denim was put to another good use – a sultry mini dress in dark wash denim. We’re not certain whether it’s a jacket or a dress, but as it can clearly be worn both ways, and there is nothing better than a multi-purpose garment, we say, Kudos to Milan.

So, how do you like what the fashionistas are rocking? Did anything make it onto your wish list?